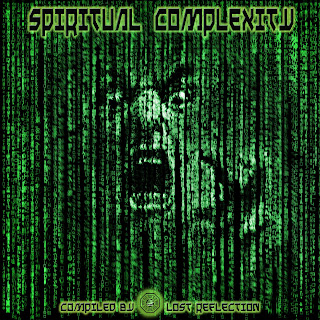 HSSR welcomes you to Spiritual Complexity release party
In A Mystic And Magic Place Near Athens
For Details: 6972520188 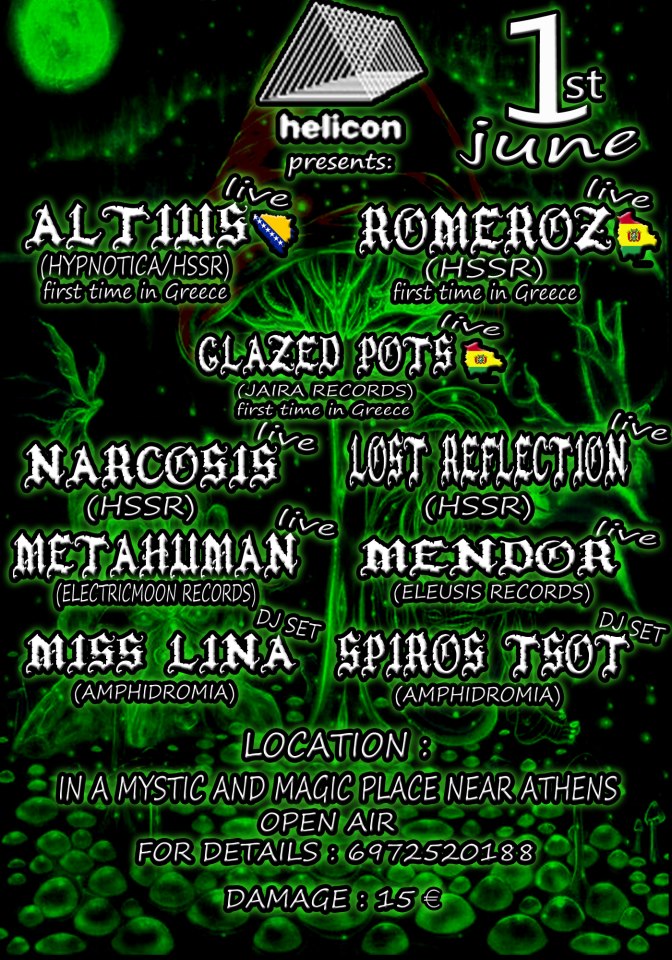 ALTIUS (Hypnotica/HSSR) live - first time in Greece
http://hss-odyssey-2011.blogspot.gr/201 ... weden.html
The morbid one behind this project is Dino Vandzic. Born on planet Earth and living in Gothenburg. Music has always been his favourite hobby. He started to play drums in a Hardcore/Neometal band when he was 13 years old and has been going on since then. When he first started making psychedelic music he knew he wanted something that wasn't created yet. This music would be involve more speed and pressure in the dark. After one year of experimenting this vision has become reality. Between 155-190bpm, Altius music defines the heaviest basslines and craziest hypnotizing leads along with alot of drums. Altius plays for Hypnotica Recs (Sweden) , Helicon Sound System Recs (Greece) , Mental Records (Australia) and Y.A.W.W.E Records ( Swiss ).
He is also working on several different music projects called Theory 3.1 (Altius & Depth) , Devils Project ( Altius & Cyko ) , Psilo Gringos (Altius and Equinsu Ocha) and The Dark Prophets (Altius & Ponta). Altius and his friends also organize parties together and no Fullon is allowed.

The dude behind romeroz project is martin.
he was born in bolivia but now lives in sweden.

in 2005 he started his dj career and he has played around in sweden, france and lithuania
and shared stage with artists as psykovsky, hishiryo, kluster, troglodytes, yara and many more.

his biggest inspiration is zik, orestis, polyphonia (R.I.P), savage scream and galaxy madness.
with those crazy artists in his head and his own ideas and thoughts he started to make his own music in 2008.
he got some releases out on helicon sound system records and hippyflip records
and some are coming soon on other labels + his second EP is in progress.

in 2012 he started a dark progressive side project called @glazedpots
a EP and releases are coming soon on jaira records and horsepower productions.

Iraklis aka Narcosis was born in Athens – Greece in 1984. While growing up in Cyprus , he got involved in music until 1996 where he discovered Music Technology and got Stuck with it. In 1998 he started to Dj in Athens with local DJs and in 2005 he was one of the Founders of Paranormal Research promoting group and Athens Tribal Unity Besides his Dark-Psy project Narcosis and his experimental atmospheric solo project “Bon Voyage” , Iraklis is also a part of “Phobos & Deimos” along with team mate N.O.M and “5ips1s” along with Cymazz Until now Narcosis has released an album and many tracks on many respected labels around the globe.

Lost Reflection (Jim K.), an artist from Athens, Greece. His style can be described as a fusion of the modern trends of psytrance heavily influenced by the Athenian darkpsy aura. Through his music Lost Reflection seeks to escape from the matrix in order to make a journey to the Platonic world of ideas and their reflections.

Lina (Powermix), is the first female radio producer and dj in the rave scene of Athens, playing mostly trance, hard trance, psytrance, drum & bass and breaks. Started as a radio producer with "Powermix" back in 1993 at the legendary LIFE FM, and since 1997 she was in BEAT FM, BLUE SKY, BLUE SKY TV FREE, RADIO 98 FM and nowdays at LIFE 892.com. Her show is on air every Tuesday and Thursday 22:00-24:00, still playing drum & bass, psytrance and progressive psy. Being a well known dj and radio producer she has performed as Resident and Guest in the most famous dance stages, clubs in Athens and all over Greece, like: ALSOS, BATTERY, BERLIN, TESSERA, FACTORY, DOM, HORUS, DOMUS, LIQUID, AMFITHEATRO, CAMEL, SEVENTH HEAVEN, CITY GROOVE, MAD, X-MOVIE THEATER etc. Being a member of GIRLS IN THE JUNGLE, a drum & bass project, and also member of trance & psy-trance project called RIOT GIRLS. She is the founder of BASS SYNDICATE project and member of BREAKTONE project, with strictly drum & bass nuskool and oldskool music. She likes doing remixes of her favorite songs of 80's to breaks, and remains fanatic with vinyls as she still prefers to play with MK2 during her sets.

SPIROS TSOT (aka Spiros Gasteratos) was born in Athens in the late 70's!His journey in music started in the 90's with the world of electronic music!Then....Psychedelic trance came into his life!
In the beggining he got involved in parties and the music scene,collaborating in promotional activities with Sunrise Zone,Infinity and Amorphia, and this motivated and inspired him to start djing! since then he has played in several private parties broadcasting his style of Psychedelic trance!he currently has his own show @ life892.com every Weekend@ 20:00-22:00

Users browsing this forum: No registered users and 5 guests